The kit is used to detect and quantify the BRAF V600E, E2, D, D2, K, R and M somatic mutations in human genomic DNA. The principle of detection is based on real-time PCR methodology with the use of fluorescently labelled probes and allele-specific primers. The kit contains all components necessary to perform the analysis. 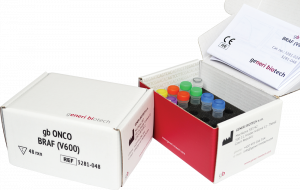 Single nucleotide mutation of the BRAF V600 gene leads to increased activation of the MAP kinase cascade, resulting in proliferation and dedifferentiation. However, the BRAF gene mutation alone is not sufficient to induce a malignant transformation. Its role lies more in the progression of the disease than in the initiation.

The occurrence of the BRAF V600E mutation was observed, for example, in melanoma, Langerhans’ ischemia of the pancreas, or ovarian and colon cancer. BRAF gene mutations are also associated with several tumors (malignant melanoma, non-Hodgkin’s lymphoma, thyroid papillary carcinoma, non-small cell lung carcinoma and lung adenocarcinoma). Before initiating treatment with vemurafenib or dabrafenib, patients should be confirmed with the validated test of the V600 mutation of the BRAF gene. Vemurafenib is not suitable for patients with malignant melanoma and a wild type variant of the BRAF gene.

Parameters of the diagnostic kit 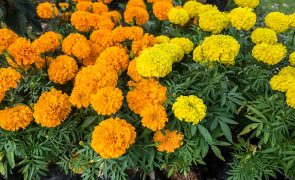 The technology of dual-labeled hydrolysis probes (also called TaqMan® real-time PCR probes) exploits the 5 ́-3 ́ exonuclease activity of Taq DNA polymerase to cleave the probe. TaqMan real-time PCR probes are labeled with a fluorescent dye (reporter) at the 5´ end and with a quencher at the 3´ end.